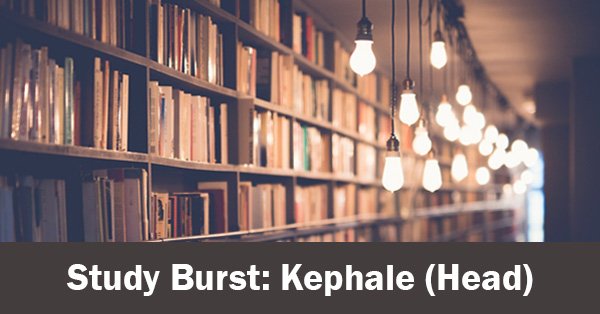 This Study Burst is an aid to deeper study of the Greek word kephale. Kephale is used metaphorically in certain verses in the New Testament that mention relationships involving God, Jesus, the church, husbands, and wives. Ones understanding of kephale can help shape ones understanding of these relationships. This Study Burst focuses on the meaning of kephale as it relates to the marriage relationship, but it is not without touching on the others.

.
Kephale (kef-al-ay’) is found in the New Testament about seventy-five times depending on your translation. It is mostly translated “head”. It sometimes appears as “chief” as in the expression “chief corner stone.” (Matthew 21:42, Mark 12:10) Kephale has both a literal and metaphorical meaning. The literal meaning is “anatomical head”.  The literal meaning is by far the primary usage. For instance, fifty-six out of seventy-five occurrences refer to an anatomical head (either human or animal) in the NASB.

Generally speaking, complementarians would say that kephale has the metaphorical meaning of “authority over”, “ruler”, “leader”, or “chief”. Seeing that Ephesians 5:23 says “the husband is the head (kephale) of the wife”, the context of that verse together with other relevant verses is believed to show that husbands have God given authority to lead in marriage. This has also been the longstanding understanding within the church. Since the seventies and eighties, egalitarians have promulgated a different metaphorical meaning. They espouse the view that kephale has the metaphorical meaning of “source” and not authority or leader.  There are also other suggestions that have been put forth like prominence and preeminence. These different positions also acknowledge a head/body metaphor picture.

Resources and Suggestions for Studying kephale

Which view about the metaphorical meaning of head/kephale is correct? While it is not at all the only important thing about passages like Ephesians 5:21-33, it does deserve careful study. Below are some suggestions to help study this out both biblically and with other resources. The Bible is and always will be the first and final say, but we can benefit from looking at other material as well. Amongst other things, it can help us fact check things we might hear or read on the topic.

Below you will find articles written from complementarian and egalitarian viewpoints. Some are well-known and important in the debate. I’ve included articles from different viewpoints because any study for truth should look at all sides. Also, I believe in going to the source directly instead of just reading someone’s take on the opposing view. We do not need to be afraid to do this kind of work. With prayerful and honest study and God’s help, we can see truth and error. In the process, we might confirm that what we believe is biblically correct or find that we need to change what we believe to line up with God’s word. Confirming or arriving at the truth is worth the time, effort, and possible uncomfortableness of testing our beliefs.

As always I caution, pray for discernment. Read carefully. Not all arguments are convincing or correct. In order for one view or the other to be correct, there must be a factual, logical, reasonable, and biblical argument. Since the two viewpoints, complementarianism and egalitarianism, contradict each other, one must be in error. It can be seen with God’s help and prayerful, diligent work.

When we study viewpoints that oppose each other, even if we already hold a certain position, it is wise to ask the Lord to open our eyes to truth and any prejudice we might have. It does not serve us well to simply try to come back to the place we think is right. The end goal is walking in God’s truth.

Keep a good, accurate Bible like a NASB, ESV, or KJV by your side throughout the study. Practice good biblical exegesis. Read verses in context and read other verses that might relate to the topic. The following list serves as a starting point. Other verses may come into play too depending on what aspects you are studying. The belief that a husband’s role includes the element of authority or the belief that he is the source of his wife is not limited to one word in one or two verses. It is best to take all relevant Scriptures together.

There are many commentaries available for us to review. Some have been around for a long time and some are modern. I like to read older ones and trace ideas through the centuries. If you do not have any in your home, there are many online or in Bible software and apps. If possible, learn about the background of the author(s) and bear it in mind.

To help get you started:

Thayer’s Greek
Definition of kephale:
1) the head, both of men and often of animals. Since the loss of the
head destroys life, this word is used in the phrases relating to
capital and extreme punishment.
2) metaph. anything supreme, chief, prominent
2a) of persons, master lord: of a husband in relation to his wife
2b) of Christ: the Lord of the husband and of the Church
2c) of things: the corner stone

Below is information from seven Greek Lexicons regarding kephale.

I do not have access to most of the following lexicons. The quoted information comes from the article “The meanings of kephalē (“head”) and hypotassō (“submit to”): After 30 years of controversy, where are we?” written by Dr. Wayne Grudem. Pages 2-5. (See link below.) Dr. Grudem is a proponent of “authority over” for kephale. He has researched this topic extensively and has written several articles about it. Please see the link below for the full context of this important lexicon data.

“1. BDAG (2000), 542: 2. A being of high status, head (a) in the case of living beings, to denote superior rank ….Of the father as head of the family…. Of the husband in relation to his wife…. Of Christ in relation to the Christian community…. But Christ is the head… Of the universe as a whole… And of every cosmic power (b) of things the uppermost part, extremity, end, point …

3. Louw-Nida: Johannes P. Louw and Eugene E. Nida, Greek English Lexicon of the New Testament Based on Semantic Domains (New York: United Bible Societies, 1988): “one who is of supreme or pre-eminent status, in view of authority to order or command—’one who is the head of, one who is superior to, one who is supreme over’” Ephesians 4:15… 1 Corinthians 11:3 (vol. 1, p. 739)

7. Liddell-Scott: Greek-English Lexicon edited by H. G. Liddell and Robert Scott, and revised by Henry Stuart Jones (ninth edition; Oxford: Clarendon, 1968; revision of 9th edition of 1940), p. 945:
II, 1. Of things, extremity
a. In Botany
b. In Anatomy
c. Generally, top, brim of a vessel…capital of a column
d. In plural, source of a river, Herodotus 4.91 (but singular, mouth); generally, source, origin, Orphic  Fragments 21a; starting point [examples: the head of time; the head of a month].”

The above selection of lexicons lists six that give meanings akin to rank, authority, or leader. One, the Liddell-Scott, gives “source” (when in the plural) as a sub meaning under the second category: Of things, extremity.  This entry in the Liddell-Scott has been central to the egalitarian argument for decades, though it is not as supportive as may appear. For an analysis, please see the link below to “Does Kephalē (“Head”) Mean ‘Source’ Or ‘Authority Over’ in Greek Literature? A Survey of 2,336 Examples” by Dr. Grudem. [p.44]

Critical information about the Liddell-Scott entry also appears in Dr. Grudem’s article “The meaning of κεφαλή (“head”): An evaluation of new evidence, real and alleged”.  (See link below.) I will share part of that information here. On pages 39 – 41, Dr. Grudem writes about the results of a correspondence he had with the then editor of the Liddell-Scott, Mr. Peter Glare, regarding kephale back in 1997. Dr. Grudem had sent Mr. Glare a copy of his 1990 Trinity Journal article “The Meaning of kephale: A Response to Recent Studies” that defended the metaphorical meaning of “authority over” for kephale. (See link below.) Mr. Glare reviewed the article and responded expressing “broad agreement” with Dr. Grudem. Mr. Glare gave credence to “authority” and took issue with “source” saying: “The supposed sense ‘source’ of course does not exist and it was at least unwise of Liddell and Scott to mention the word.”

This expert’s comments essentially corrected the entry and weakened the argument for “source” from the Liddell-Scott. By extension, it weakened the egalitarian argument because they rely heavily on it. Please see the article to read the whole letter. It is critical to the question at hand. Also, please make note of it as you study this out. I still see the Liddell-Scott entry often given as the reason for espousing “source” for kephale, and you might too. Referrers might be unaware of Mr. Glare’s important contribution to the discussion.

Below is a list of online resources for a deeper study of head/kephale. These articles about the metaphorical meaning of kephale come from both complementarians and egalitarians. Again, an honest study should look at all sides. Some of the sources below reference each other. Cross check whenever possible. It is very interesting to read one and then other. If you look online, you will find even more articles. There are also books that cover this topic and other topics relating to roles and gender; but online articles are free and easily available.

1954. Stephen Bedale. “The Meaning of Kephale in the Pauline Epistles.” Journal of Theological Studies (October 1954): pp 211-215. [Mr. Bedale mentions “source” too, but does not completely take “authority” out of kephale or unique submission from wives.]

Unknown. Laurie Fasullo. “What about the word Kephale (“head”) in the New Testament?.” [Searching Together, searchingtogether.org]

The first date of 1985 below does not mean that this was the beginning of the belief within the church that head/kephale had the metaphorical meaning of authority. It is just a reflection of the order of the modern day debate.  As mentioned above, it has been a longstanding understanding within the church that husbands have God given authority to lead in marriage. Church history has many examples of statements that demonstrate the idea that being the “head” of his wife indicates authority for a husband. A search of early and later church writings will demonstrate this. For a look at some examples from the 1500s – 2000s, please see the Commentaries section above for links that lead to commentaries from that time period. The verses they examine are 1 Corinthians 11:3 and Ephesians 5:23.

To read this article, please see Appendix One of Recovering Biblical Manhood and Womanhood: A Response to Evangelical Feminism. It begins at page 425

2015. Wayne Grudem. “The meanings of kephalē (“head”) and hypotassō (“submit to”): After 30 years of controversy, where are we?” [Wayne Grudem, waynegrudem.com]

Advocates for Source and Preeminence

Histories of the debate

2009. Alan F. Johnson. “A review of the scholarly debate on the meaning of ‘head’ (kephale) in Paul’s writings.” Ashland Theological Journal (2009) [Women in the church, womeninthechurch.co.uk]

“The sum of Your word is truth, And every one of Your righteous ordinances is everlasting.”
Psalms 119:160 10 Guidelines for Good Communication in Marriage